Isabela is the largest of the islands and one of the youngest, geologically speaking. It is formed by a chain of volcanoes, of which the Sierra Negra is the most visited and has also been erupting quite recently. The island is relatively little visited and is more remote far to the west without an international airport. However, there is a nice public speedboat connection between Puerto Ayora and Puerto Villamil, which is the cozy capital of the island, where you have a base for island hopping trips. Villamil is a cozy little town with beautiful beaches and a number of excellent hotels. There are fantastic dives and snorkeling opportunities from the city, primarily per. boat

From the city you can also go by lancha (small boat) to Tintoreras Island, where you have super snorkeling opportunities. The small boat (out and home) costs approx. $ 30 per person, in total.

The Sierra Negra volcano can also be visited on a full-day bus excursion. It is an exciting opportunity to see a completely different landscape than what you see on the coast. Dramatic volcanic activity characterizes the landscape and there is a beautiful view from up there.

This rather large island is like the other islands (except Isabela) characterized by a large main volcano.

Sullivan Bay
People often visit Sullivan Bay, which is just opposite the small island of Bartolomé. Sullivan Bay has a very beautiful hike on new lava (about 130 years old) – quite impressive scenery. In addition, Sullivan Bay has a beautiful little beach where there is not much wildlife, but you still often see a sea lion in the water, and if you are lucky a penguin. In addition, a great place to practice snorkeling and if you go further out, there is a chance to meet turtles. You see Sally Lightfoot crabs, herons and possibly. sea ​​iguanas. A really nice place to relax and swim and snorkel after the hike on the lava.

This is one of the most famous and most visited of all the islands in the Galapagos. And you can well understand that. It has the very beautiful Pinnacle Rock, which towers right by the small bay and around which one can snorkel. Furthermore, the landscape is dramatically volcanic and one can hike up to the top in 30 minutes along a path partly of wood.

You typically visit 2 places on the small island:

The top of the island
Here is a dry landing, and you then walk along a marked and very easy path up to the top. There are beautiful views of the dramatic volcanic landscape and “splatter cones” (small volcanoes) and a terrific view of Pinnacle Rock and Santiago Island as well as the Pacific Ocean (you are about 30 km south of Ækavtor here).

The beach
Wet landing on the beach and from here you can swim and sunbathe and walk around a bit. There are typically a few sea lions and often penguins in the water or on the rocks on the way into the dinghy (IT IS THE BEST PLACE TO SEE PENGUINS FOR MOST PEOPLE). Many snorkel from the beach out and around Pinnacle Rock, or you jump into the water out there from the rubber boats and swim in towards the beach.

This small island is located well to the north and “lacks” a number of species that the other islands have. It is believed that this is because it does not receive the ocean currents from the southeast from which the animals originally came floating. The island can be very hot to visit in the hot weather, but has a very exciting bird life. You typically visit 2 places.

Prince Philips Steps
Dry landing and hiking through bush vegetation to the other side of the island (a few hundred meters) – but here can be VERY hot and unbearable in the hot weather. You will find the Red-footed sole here (only here you see it on its turn). It has nests in the trees, and when you get to the other side of the island, there are frigatebirds, Nazca gannets and thousands of storm swallows (a seabird) that breed in lava caves. If you are wildly lucky, you can see the little endemic horned owl that chases the storm swallows in daylight. It is quite a beautiful trip and there is a lot to look at. There are also sea iguanas and other bird species.

Darwin Bay
This small sheltered bay has a nice little beach and you can swim and snorkel from here. There is usually little visibility, but good chance of seeing rays, even small eagle rays.

You can go for a really nice walk in the mangroves. There is also a small tidal river and you can see birds up close. Often a good opportunity for fine photos of swallowtail gulls and red-footed gulls as well as gulls.

The red island has got its color from the ferrous low that has formed the island. We find here a beautiful saltwater lagoon where you can spot pelicans and gannets. 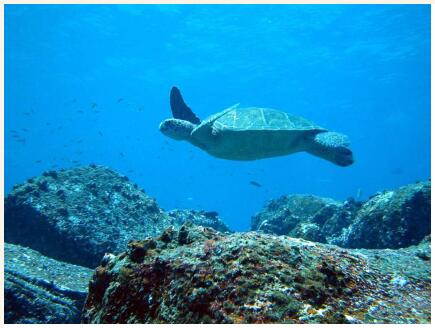